Compassion is the answer to everything.

You are here: Home / Faith / The Walking Wounded

A cab driver arrives at the Pearly Gates and announces his presence to St. Peter, who looks him up in his Big Book.  Upon reading the entry, St. Peter hands the cabby a robe and a golden staff and opens the gates.  A preacher is next in line.  He announces himself to St. Peter, and upon scanning the preacher’s entry in the Big Book, St. Peter furrows his brow and says, “I suppose we’ll let you in, but you only get the cloth robe and the wooden staff.”  The preacher’s astonished.  “There must be some mistake,” he says. “I’m a man of the cloth.  You gave that cabby a golden staff and a silk robe, and you’re telling me that I rank lower than a cabby?”  St. Peter says: “Listen buddy, up here we’re interested in results.  When you preached, people slept.  When the cabby drove, people prayed.”

I’ve always wanted to be a cab driver preacher, to take people on a wild ride through the messy landscape of the Bible, through the scandalous stories that subvert our understanding of who God is and how God acts in the world.

The Bible is full of these stories. Take the story of Abraham, who climbs Mt. Moriah with his only son Isaac, so young and trusting, and ties him to a bundle of kindling and raises his sword for the sacrifice that God commanded him to carry out – only to be stopped by God just short of carrying out that unimaginable act.  You can’t sleep through story like that.

Or take the tangled story of David and Bathsheba, which begins with human desire and temptation and passion, and leads to the depths of deceit and hubris and murder – and the death of an innocent child.  You can’t sleep through a story like that.

Or take the story of Jacob that we’ve been reading these last few weeks.  It’s a story that defies our sense of morality and justice and leaves us disillusioned about the ways of God.  Brother Esau returns home after a long day of hunting, sun-beaten and empty-bellied, and there’s Jacob, cooking up a plan, offering a pot of stew in exchange for the family inheritance.  Jacob the deal-maker, the con artist, trampling on anyone in his way.

Soon after, his father, Isaac, is lying on his deathbed, blind and only half-conscious, calling for his eldest son, Esau, to give him the blessing that was due to his firstborn child. Only it is the trickster Jacob who takes on his brother’s guise and poses as Esau, deceiving his unsuspecting father and stealing the blessing.

That was the last straw for Esau.  When Esau is told of his brother’s crime, he makes a pledge: “Upon my father’s death,” he vows, “I’ll hunt down my brother and I will kill him.”  But before Isaac takes his last breath, Jacob has already packed his bags and slipped out.

This is the messy landscape of our Bible.  Jacob is not the kind of character you want to pull for; he’s a thief, a huckster, a schmuck, and yet it sounds like God is on his side, as if the world belongs to those who are strong on guts and deceit and weak on conscience, people who know exactly what they want in life and are fearless in going after it, regardless of the collateral damage it causes for the rest of us.

When you look at the world today, there are Jacobs everywhere.  They amass great wealth and power by trampling on the unsuspecting Esaus.  Bernie Madoff, the frauds behind Enron and Bear Stearns.  It happens every day in our world, but in the Bible, we expect things to be different.  Jacob is a liar and a cheat, and yet he’s God’s chosen instrument?  It’s not right.  It subverts our sense of justice and fairness.

But God has not yet had the last word on the story that is Jacob’s life.  If his life were a movie, this is the point in the film when the soundtrack would play a little Johnny Cash:

Go and tell that midnight rider

It’s at the place called Penuel, near the ford at the River Jabbok, where Jacob finally meets his match.  He’s been running from Esau for twenty years.  Along the way he’s picked up two wives, the daughters of a shrewd, wealthy man named Laban, who’s pretty much the Donald Trump of his day.  Jacob serves as Laban’s apprentice and wins not only his two daughters, but also enough gold and livestock to make him a very wealthy man.

By now Jacob has everything a person could want, except the one thing every person needs most: a home, a place in this world where he doesn’t have to run anymore.  What he desperately wants is the home he inherited in his father’s final blessing.  It’s the only thing he doesn’t have, and it’s been waiting for him for twenty years, just on the other side of the river – where his brooding brother lies patiently in wait to fulfill his pledge of final vengeance.

So Jacob sends caravans of camels and goats and sheep and servants ahead of him as gifts, hoping to appease his brother.  Jacob the deal-maker, the rambler, plans to buy his brother’s forgiveness.  A few hundred sheep, a couple dozen servants, a handful of camels.  For Jacob it’s just another business deal and there’s no problem that can’t be solved by cutting another deal.

So when the last caravan of animals fades from sight and his family crosses the river, Jacob stays behind.  He lights a small fire and hovers over it, warming his hands deep in thought, planning his next calculated move.  As time passes, the fire dies and the countryside finally holds its breath in quiet hush, until it’s just Jacob and the brooding darkness of the night.

And that’s when God shows up, or an angel.  The text is unclear: the Hebrew Midrash says it’s an angel, but Jacob swears it’s God.  Whatever it is, it’s from God, and its mission is to trip up the man who has tripped up everyone in his path.  Its mission is to defeat Jacob the deal-maker in order to raise up a true leader.

Jacob is ambushed by the stranger in the night; a fight ensues.  There’s slapping and thumping and grunting and gasping.  Just when one of them seems to gain the advantage, the other slips out and puts his opponent in a head lock.  It’s back and forth all night long under the dark canopy of black sky and starlight.  All the dust, the snapping of twigs, the blood, the smell of sweat, the pounding of fists, and neither of them can be overcome — until just before dawn, just when it looks like Jacob has taken the upper hand, that’s when the stranger finally unloads one sharp, carefully directed shot to the inside of Jacob’s hip, and Jacob reels in pain.  The rabbis say it isn’t his hip that takes the force of that blow, that is was a cheap shot below the belt, rendering Jacob helpless and breathless and crippled in pain.

And that’s when the stranger says, “Your name is no longer heel-grabber, because your heel-grabbing, deal-making, lying days are over.  You’re no longer Jacob.  You are Israel, because you have wrestled with God, and you have lived.”

With those words the battle is over.  Jacob becomes Israel, and Israel pulls himself up from the trampled earth and sets his face to the rising sun, at last given to begin that final journey toward his brother Esau, toward home, limping all the way.

Have you ever wrestled with God?  Have you ever endured one of those long, dark nights when you’ve been tested and crushed and nearly defeated?  Maybe it was the result of a strained relationship, a broken marriage or a troubled child, an unexpected pink slip at work, or disillusionment with the church, or a sudden medical diagnosis.  In the midst of painful challenges, we tend to ask deep questions and struggle mightily with doubt.  We may even reach a point when it feels like God is beyond our reach, or that we are somehow beyond God’s reach.

It’s at that thin, porous border that the real struggle happens for most of us, and it’s there that life most often wounds us.  We ask, why and why me and why now?  But the question is not, will we struggle in life, will we wrestle with God?  The most important question we can ask ourselves is not why now, but what now?  Will we get back up, like Jacob, carrying our wounds, and limp courageously toward an unknown promise?

This is the distinctive mark of people of faith: that we struggled, we wrestled, and we were wounded, and yet we prevailed.  We lived.  Blessed by God, we climbed back to our feet and dared to walk, even with a limp.

I know a woman who lost her husband suddenly when she was sixty-two.  They spent much of their savings paying for his medical care.  At the age of sixty-two, she decided to go to nursing school.  She had to work to pay the bills, so she went to nursing school at sixty-two.  Three years later she was walking the halls of a hospital binding wounds and tending the sick.  She’s seventy-four now and retired.  She said, “There was a time when I thought I’d never make it, but I knew I had to make a conscious choice to keep going, even with the pain.”  She had wrestled with God, and had prevailed.

I had a good friend who endured breast cancer.  Years of chemo and radiation followed.  I preached her eulogy last fall.  We met for coffee one afternoon after her first treatment.  Her hair was growing back, more grey than it was before.  She said, “Feel my head.”  She titled her head to me and I reached up and ran my fingers through her new hair.  It felt like a fresh pile of baby powder, soft as silk, light as the air.  She said, “This is my new hair, and this is my new life.  The old me is dead; I’m a new person now.”  Her name was Rev. Lynne Austin.  She had wrestled with God and lived to tell about it.

There are no saints without wounds.  Anyone who follows God will do so with a limp.  May we be as those who have wrestled with God and prevailed.

Mark Feldmeir is the author of four books, including his latest work, A … END_OF_DOCUMENT_TOKEN_TO_BE_REPLACED 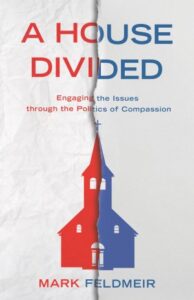 Join Mark's mailing list and receive updates whenever he publishes a new book or has important news to share. Your email address will never be sold or rented and you can unsubscribe at any time.

You Need To Get Out More

Once upon a time when we knew our neighbors—their names, their stories, their … END_OF_DOCUMENT_TOKEN_TO_BE_REPLACED

Stirred Not Shaken: Sermons for an Emerging Generation is a newly-released … END_OF_DOCUMENT_TOKEN_TO_BE_REPLACED

Testimony to the Exiles 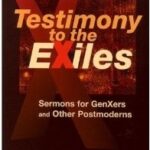 In a culture of conspicuous affluence, rampant consumerism, social … END_OF_DOCUMENT_TOKEN_TO_BE_REPLACED

Tune in for Preaching the Common Good: A Weekly Gathering for Pastors & Church Leaders. Every Wednesday through November 11, 2020. Learn More.

Appearance on “Vital Conversations” with the Mountain Sky Conference of the UMC: Wednesday, September 23 @ 11:30am MT. Learn More.

My latest book, A House Divided, will be available September 8, 2020. Please join my mailing list to learn more about the special book launch events we have planned.

It is available from all major online retailers and can be ordered directly from the publisher, Chalice Press.